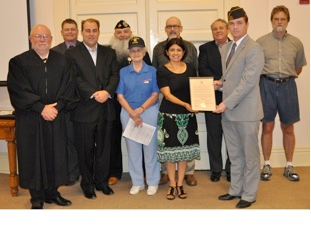 Hays County Courthouse, San Marcos, TX – The Hays County Commissioners Court has issued a proclamation supporting the Capitol of Texas Vietnam War Monument that is planned for the grounds of the State Capitol on August 21, 2012. Authorized by the Texas Legislature, the monument will be built by private donations to honor the more than half million Texans who served in the Vietnam War. Twelve Texas Vietnam veterans received the Medal of Honor, the nation’s highest award for valor. More than 3,400 Texans were killed in the war and some 10,000 were wounded.

The new monument would join existing monuments for those who served in other wars and conflicts, from the Alamo to the Korean War.

The proclamation encourages all citizens to honor and remember the deeds of a group of veterans who served selflessly and fought courageously and to support the measure authorizing the construction of the monument.