Hays County Courthouse, San Marcos, TX – Precinct 3 Commissioner Lon Shell, joined by former Commissioner Will Conley, officially opened an improved one-mile section of Haschke Lane September 19, with area residents turning out to thank the County and the road crew who did the repairs. The repairs took about three months’ total, but was done in stages beginning in fall 2017.

The road was badly damaged by the 2015 floods, as were a number of properties in the area, and serves as the only outlet for residents along Haschke Road near Fischer Store Road as well as for residents of a subdivision on a hilltop overlooking the Blanco River.

“The crew was great to work with and very helpful with lane closures,” one resident said.

Other residents said they appreciated the smooth road and the ability for response vehicles to get to their properties, should an emergency arise.

“Access was a real issue since the road was so badly damaged that emergency response vehicles had difficulty getting into the area,” Shell said. “We also added a cable rail along a stretch where there’s a steep drop-off to the river bed.”

The Hays County Transportation Department improved drainage by replacing cross-culverts. Rock gabions were added along the road near the Blanco River to prevent erosion, and most recently the road was repaved.

County employees and residents of Haschke Lane pose for a photo along the newly repaved and much-improved roadway. 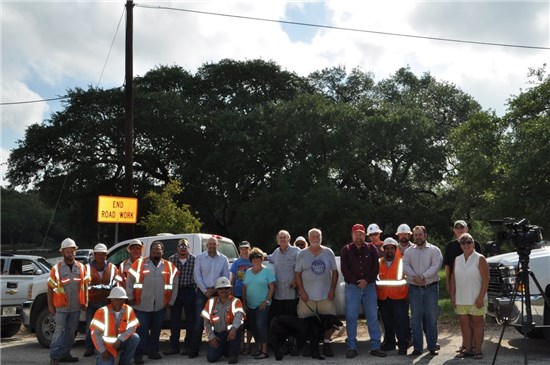