During his eight years at the County’s helm, Cobb oversaw implementation of numerous road projects, expansion of medical services to un- and under-insured residents through an agreement with Live Oak Health Partners, and a return of federal dollars to local hospitals for indigent care through what is known as a “1115 Waiver Program.” He supervised flood remediation as well as implemented video magistration to streamline the entry into the legal/justice system.

Also during his tenure, the Hays County Commissioners Court approved an interlocal agreement and the associated bylaws to establish a Combined Emergency Communications Center (CECC) and Public Safety Answering Point (PSAP) that will serve most of Hays County cities and emergency services districts when the new Public Safety Building now under construction is opened. That building is part of two 2016 voter-approved bond packages for jail improvements and expansion and road infrastructure.

Cobb announced in August 2017 that he had been diagnosed with leukemia and has been battling the disease ever since. Precinct 1 Commissioner Debbie Gonzales Ingalsbe, as the senior member of the Commissioners Court, presided in his absence at his request, with Judge Cobb checking in via email and phone.

The Judge was lauded at Commissioners Court December 18 by commissioners, who emotionally accepted for him his retirement gift of a mantel clock.

“I truly appreciate the time Judge Cobb took with me to discuss health care issues in Hays County and health care in general,” Commissioner Ingalsbe said. “His expertise in this area has been a great asset to the County. I certainly wish he was with us today, we miss him. It’s been my pleasure to work alongside of him and we all wish him and his family the very best.”

Precinct 4 Commissioner Ray Whisenant, who also retired December 31, spoke of Judge Cobb’s altruism. “Almost everything he did was to help someone – his family, his colleagues, his citizens,” Whisenant said. “I think he’d be most proud of the way the staff came together and moved forward in his absence.”

Precinct 2 Commissioner Mark Jones simply said that he was too overcome to say anything.

Cobb received a Doctor of Medicine degree from the University of Texas Medical School at San Antonio and served as a surgeon in the Air Force treating returning prisoners of war. He is also a former chief of surgery at CTMC in San Marcos and had a practice as an allergy specialist. He was president of the Pan American Allergy Society and served as a board examiner for the American Academy of Otolaryngic Allergy. 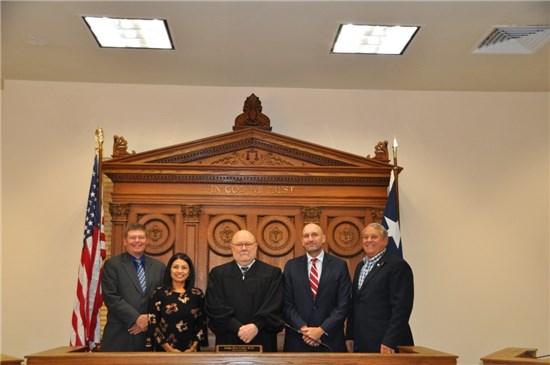