Crime Stoppers programs have empowered citizens in Texas to take a stand against crime and reclaim their sense of safety, bringing together law enforcement agencies, citizens, and the media to solve crimes and catch criminals, according to the proclamation issued by the Court.

“Crime Stoppers has existed for 37 years, and we’ve enjoyed the County’s support the whole time – it’s a very big part of what we do,” Crime Stoppers Board of Directors Chair Rowe Ray told the Court. His words were echoed by Executive Director Don Arledge and Board member Gary Tucker, who also noted that partnering with area law enforcement agencies is also critical to an effective program.

In Texas, Crime Stoppers programs have received 63,000 anonymous tips leading to the arrest of over 3,779 suspects, $1.2 million in rewards paid and over $11 million worth of narcotics seized by law enforcement responding to tips.

To learn more about Crime Stoppers, including how to submit anonymous tips, visit www.callcrimestoppers.com. 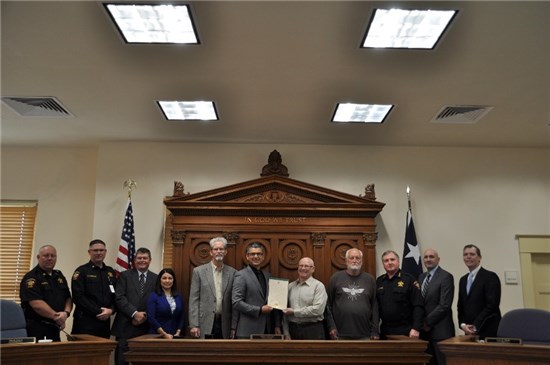