On January 21, 2020, the Hays County Commissioners Court approved initiation of a planning and engineering study to evaluate the long-term needs of a 17-mile stretch of State Highway 21 (SH 21) corridor from State Highway 80 (SH 80) to State Highway 130 (SH 130) along the eastern border of Hays County. 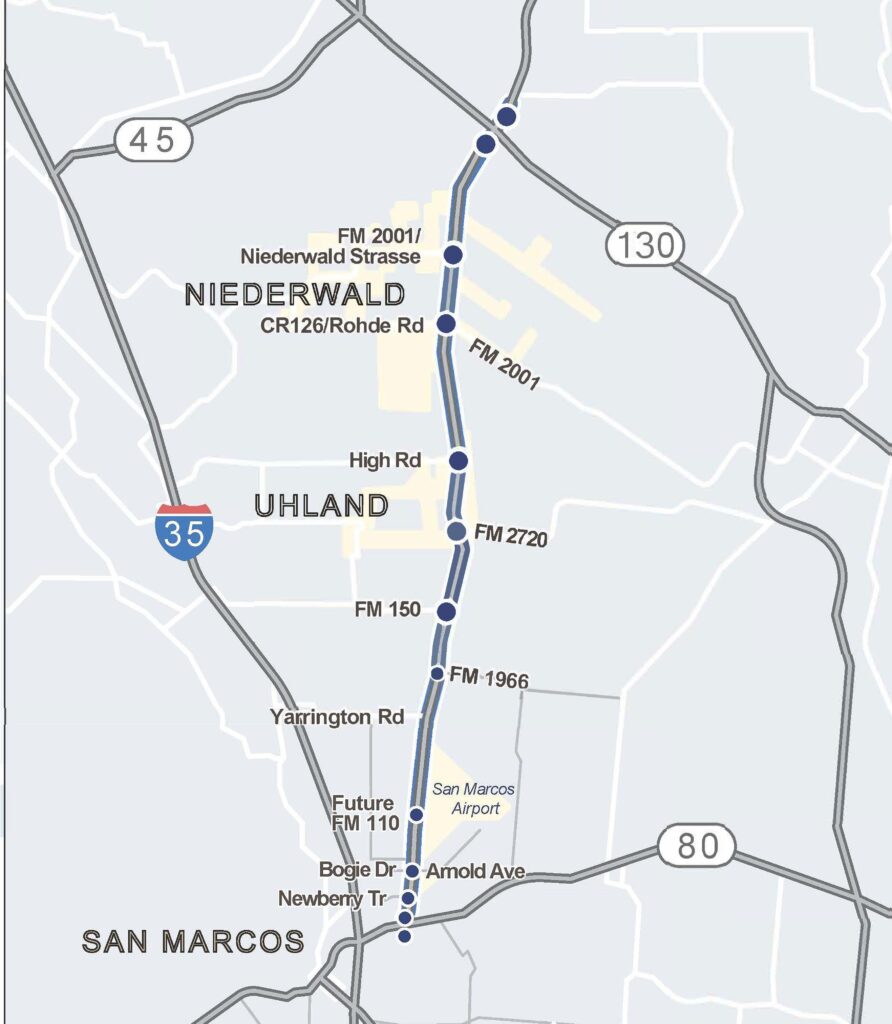 The goal of the study was to determine the long term needs and accommodate anticipated growth along the SH 21 corridor such that Hays County, in conjunction with the Texas Department of Transportation (TxDOT), could begin preserving the right of way required for the proposed improvements. The engineers considered traffic and population projections, environmental constraints, existing buildings, historic sites, business and school-bus patterns, along with a wide range of other issues during the development of recommendations for accommodating population and traffic growth, improving safety, and increasing mobility for both pedestrians and cyclists.

The engineering team began the study by evaluating the anticipated population and traffic growth along the corridor over the next 20 years. Current projections indicate that the regional population is anticipated to increase by approximately 150% by 2040. During the same time period, the traffic volume on this segment of SH 21 is anticipated to more than double. 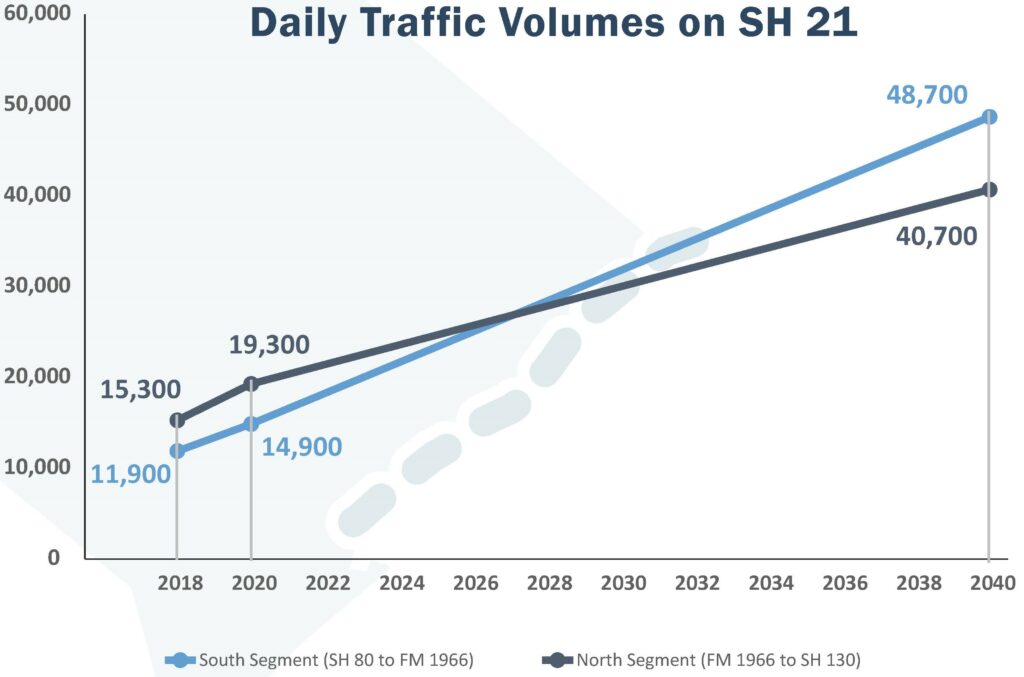 The existing highway configuration was evaluated in terms of level of service (LOS) for both the current traffic volumes as well as for the anticipated 2040 traffic volumes. LOS is a way of measuring and illustrating the amount of delay a motorist can expect to encounter on the highway corridor. As can be seen in the graphic below, SH 21 currently operates at approximately a B or C LOS depending on location. However, once the traffic volumes are increased to 2040 levels, the highway functions diminished to a LOS F. 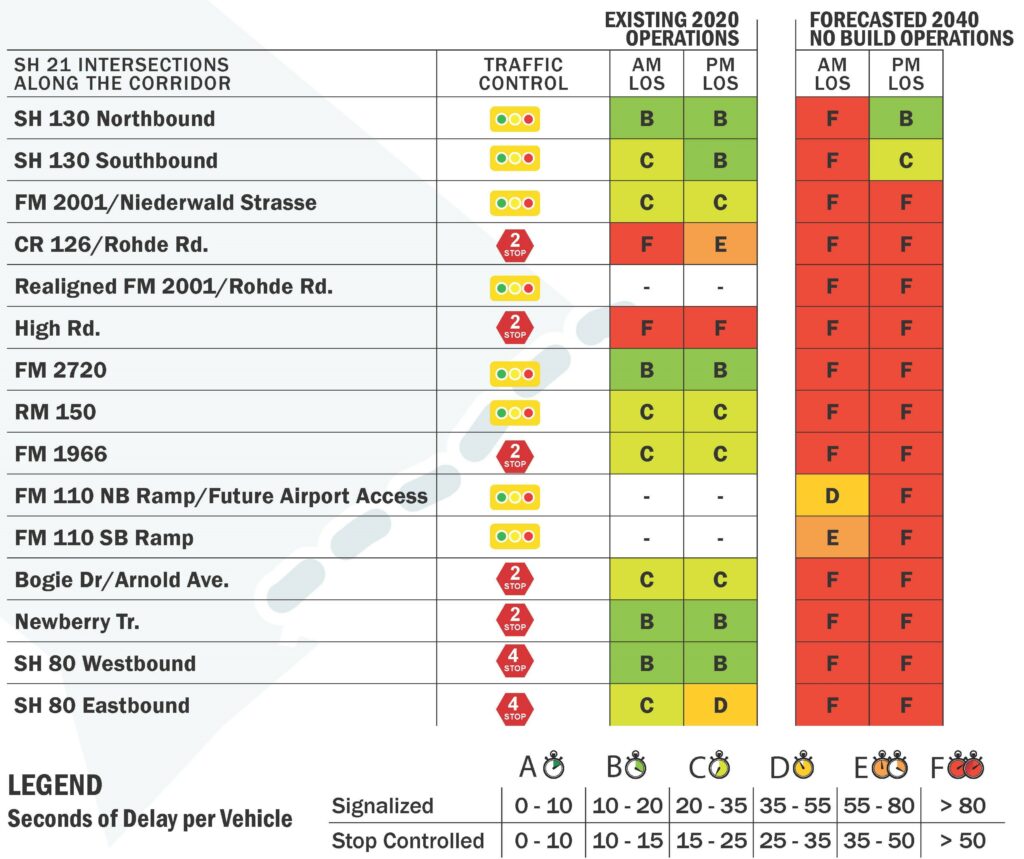 The engineering team also investigated the crash history for this segment of SH 21 using the TxDOT Crash Record Information System, or CRIS, for the prior 5 years (2014-2019). During this time period, crashes were up by 68% as can be seen in the heat map below. The locations shown in red are the areas with the highest number of incidents, and areas shown in green are the lowest. 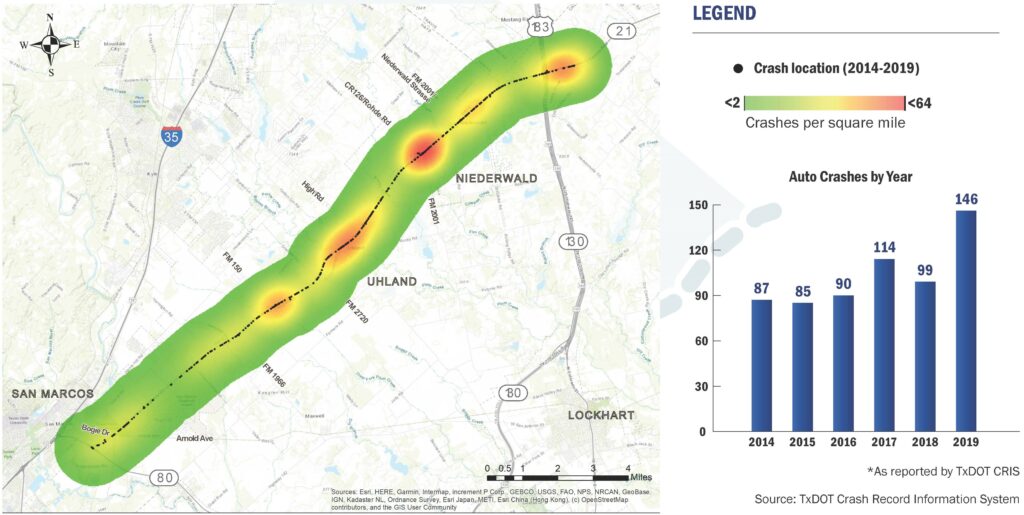 Based on the analysis of the information presented above, it became evident that the current two-lane roadway would not be adequate for the future needs of the corridor. Therefore, several possible roadway sections were developed for evaluation. These included:

This alternative proposes a six-lane divided major arterial section (MAD 6) with three general purpose lanes in each direction for the corridor. The MAD 6 section is the roadway section which was included in the current CAMPO and Hays County transportation plans for the SH 21 corridor. The anticipated right-of-way for this section varies between 200 and 230 feet in width.

The MAD 6 section increases corridor capacity while addressing safety concerns by providing a wide grassy median between the opposing traffic directions. However, this section does not address the differential speed of through traffic versus vehicles entering/exiting the facility from the numerous driveways along the corridor.

This alternative proposes a four-lane divided major arterial section with two managed lanes for the corridor. The section provides two general-purpose travel lanes in each direction and one managed lane in each direction. At the time of this study, the type of managed lane facility has not been identified. Additional detail and analysis of managed lane operations will be required to progress design of this alternative, including the addition of overpasses for the managed lanes at all intersections along the corridor in order to provide for unimpeded flow within the lanes. The anticipated right-of-way for this section varies between 200 and 230 feet in width.

The managed lane section increases corridor capacity while addressing safety concerns by providing a rigid concrete barrier between the opposing traffic directions. However, this section does not address the differential speed of through traffic versus vehicles entering/exiting the facility from the numerous driveways along the corridor.

This alternative proposes a four-lane divided freeway section with frontage roads for the corridor. The section provides two freeway travel lanes and two frontage road travel lanes in each direction. The anticipated right-of-way for this section varies between 250 and 280 feet in width. Additional width may be necessary in the vicinity of entrance and exit ramps as well as at major intersections where grade separations are provided.

The freeway section increases corridor capacity while addressing safety concerns by providing a rigid concrete barrier between the opposing traffic directions. This section also addresses the differential speed of through traffic versus vehicles entering/exiting the facility from the numerous driveways along the corridor using frontage roads.

Each of these alternatives were evaluated with regard to capacity and improvement in the LOS, safety, environmental impacts, and impacts to residences and businesses adjacent to the existing SH 21 highway as well as along potential bypass routes.

Construction of bypass routes are under consideration around the cities of Uhland and Niederwald. Right-of-way constraints in both cities limit the possibility of SH 21 widening without significant impacts to adjacent residences and businesses. Bypass routes would drastically reduce these impacts while diverting through traffic from the existing corridor, improving safety and maintaining access to local traffic on a business route along the existing SH 21 alignment. The bypasses also improve safety by separating the through traffic from the local business traffic within these communities. It is anticipated that TxDOT would still own and maintain the existing roadway as a business routes.

Options were investigated for placing a bypass to the east and west of Uhland in the vicinity of RM 150. The two eastern bypass options were quickly determined to have substantially more impact than the western bypass route. During the first virtual town hall, public comments expressed support for the western bypass. Additionally, this route was supported by the public well as Hays CISD during the initial stakeholder outreach. However, the City of Uhland was undecided on the bypass concepts.

Several options were developed for the Niederwald area and presented to major stakeholders for consideration. The options developed included two alternatives for staying roughly on the current SH 21 alignment, with one alternative missing the Trinity United Church of Christ to the east and the other alternative staying along the eastern side of SH 21. The project team also investigated alternatives placing a bypass to the east and west of Niederwald in the vicinity of FM 2001. A western bypass was determined to have substantially more impact than the western bypass route due to current development construction. An eastern bypass route cannot be advanced without Caldwell County support as the alignment sits outside of Hays County.

All three alternatives (six-lane divided, managed lane, and rural freeway) were determined to be feasible to accommodate corridor growth. Without the proposed improvements, motorists would experience level of service (LOS) “F” throughout most intersections within the project corridor by the year 2040. With the proposed improvements, the corridor would operate at mostly LOS “C” or better. LOS is measured during peak hours on an “A” to “F” rating scale, where “A” is free flow and “F” is significant delay. Microsimulation modeling of the preferred alternative is recommended as schematic design progresses.

The best performing alternative is the rural freeway section with two main lanes in each direction along with wide shoulders and two-lane frontage roads. This alternative provides LOS “B” and “C” at most intersections with very few intersections operating at LOS “D”. 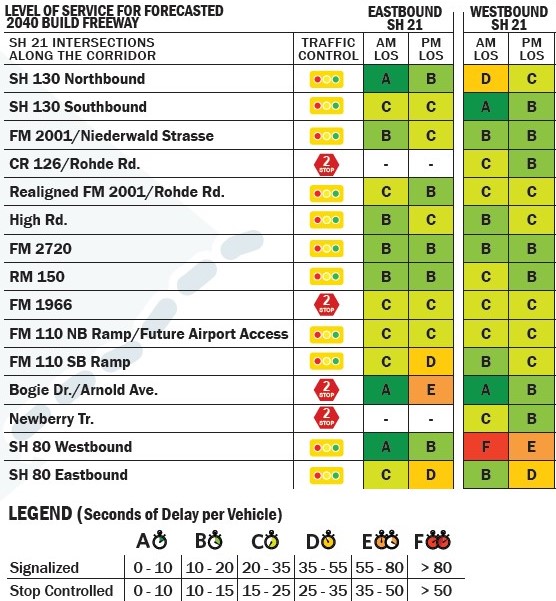 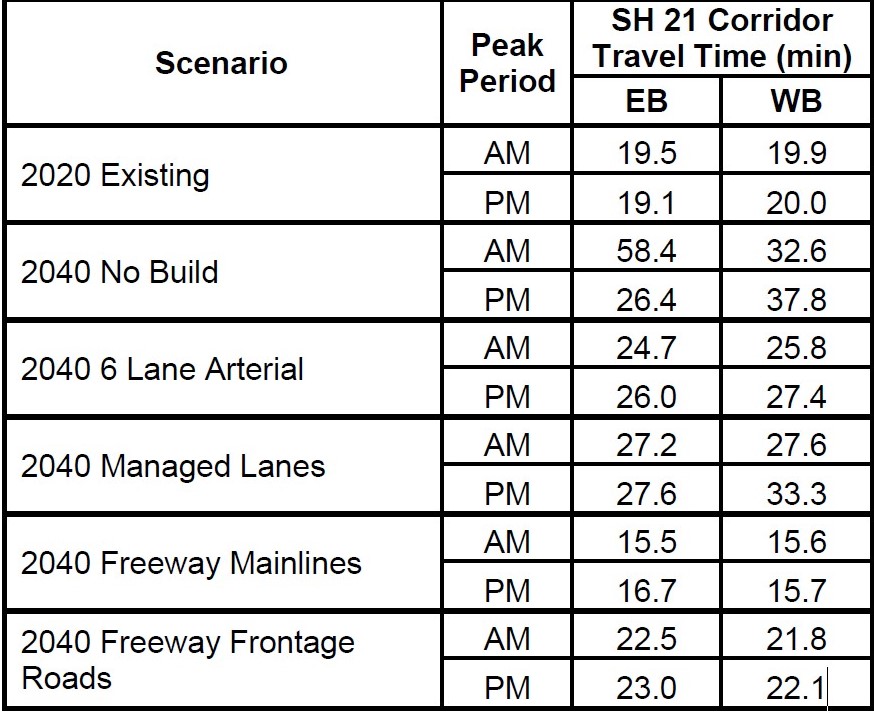 It is important to note that the interchanges of SH 21 and SH 80 on the west terminus and SH 21 and SH 130 on the east terminus were identified as the most congested intersections on the corridor. Construction of direct connectors should be considered at these locations to accommodate the highly directional turning movements. Detailed micro-simulation modeling is recommended, as well as coordination with stakeholders to advance schematic design of these interchanges.

It is anticipated that Hays County will apply for state or federal funding for this project, or that TxDOT will complete design and construction. Therefore, an Environmental Assessment (EA) would be anticipated for the proposed project and the potential inclusion of bypasses would not be expected to change the document type. Technical reports required for the proposed project include biological analyses, such as a Species Analysis Form and Tier I Site Assessment; water resources studies, including a Surface Water Analysis Form and Waters of the U.S. Delineation report; a Community Impact Analysis; a Hazardous Materials Initial Site Assessment; cultural resources technical studies, including an Archeological Background Study and survey and a Historical Resources Project Coordination Request and survey; an Air Quality Analysis; and a Traffic Noise Analysis.

An analysis of the community was performed based on equitable outreach techniques. This outreach was designed to be mobile-friendly, interactive, easy to use, accessible, and multilingual; and take into account the unique needs of this specific community.

With the novel coronavirus disease (COVID-19) citizens were barred from traditional outreach methods. Social media and online engagement tools offered an opportunity to expand and diversify participation in the public involvement process, bringing more people to the (metaphorical) table. These tools provided new opportunities for the County and project team to collect and share information with the community, expanded the reach of traditional engagement activities, and produced additional data to support essential planning activities and services that keep infrastructure moving. Moreover, online tools and social media platforms removed the time constraints of in-person meetings, offered opportunities for citizens to participate in new and interactive ways, and brought new voices into the engagement process.

Virtual town halls were hosted on the project website from May 18 through May 31 as well as August 18 through September 1. All traditional town hall materials and exhibits were available digitally: boards, mapping exercises, sign-in information, and comment forms. The entire town hall process was made available in English and Spanish, as well as tailored to those who required assistive technologies (deaf or those with visual and mobility impairments). The landing page for the town hall asked those participating to “sign in” to allow the project team to capture the same data that would be gathered at a live event. An online form along with an online mapping exercise was provided to gather feedback from the public. The interactive map allowed users to post comments with their feedback about key intersections, alignments, etc. An online mapping tool was used that allowed citizens to drop a pin and place comments or ask questions directly on an embedded map of the study area. With this tool, zones were highlighted for feedback in specific areas and citizens were asked to sort their comments into categories. This data will be a crucial reference point for further development of the project. The town hall presentations can be viewed on www.sh21corridor.com.

Based on the projected level of service, population and traffic growth as well as the safety concerns associated with the differential speeds between through traffic and vehicles entering/exiting the facility from the numerous driveways located along the corridor, the project team recommends that right-of-way be acquired for the future expansion of SH 21 to a full freeway section with frontage roads. The proposed improvements would be phased in over time as traffic volumes increase.

The anticipated right-of-way width for these proposed improvements would vary between 250-ft to 280-ft in most locations. Specific locations, such as at ramps and intersections, along with the interchanges at SH 80 and SH 130 may require additional right-of-way width.

Although a high-level evaluation of the various Uhland and Niederwald bypass alternatives were performed, a preferred alignment or alternative has not been selected. Additional analysis will be performed during the next phase of the project in conjunction with TxDOT once additional funding is available. During the following phase, technical criteria will be defined to analyze the alternatives more thoroughly and additional stakeholder outreach and public involvement will be performed as required by the National Environmental Policy Act (NEPA) prior to obtaining the environmental clearance necessary for the project to advance into detailed design and construction.

Please refer to the full SH 21 Corridor Preservation Study – Recommendations Report for a more detailed discussion of the proposed findings and recommendations.