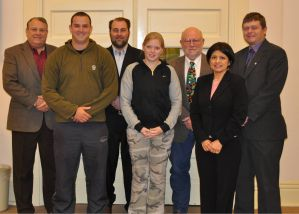 Troy Yocum, an honorably discharged Army Specialist who served in the Iraqi war, appealed to the Hays County Commissioners Court Tuesday, February 4, 2011, for support in encouraging financial assistance to veterans and the families of deployed active-duty soldiers. Accompanied by his wife and dogs, Yocum is walking across the United States to call attention to the financial hardships that veterans and the families of deployed soldiers face. He told the Court that the country’s economic situation has contributed to increased financial aid requests from soldiers’ families and increased suicide attempts by active-duty soldiers and veterans.

A one-time truck driver based in Mesquite who did his military training at Fort Hood, Yocum left his hometown of Louisville, Kentucky, about nine months ago for the West Coast. After arriving in San Diego, he turned around and stopped in San Marcos on his way to Houston and the East Coast during nearly 5,000 miles of walking. He has been in Texas since December 23.

Yocum asked that governments consider the need for financial aid for families of soldiers, and that employers help by offering jobs to veterans and spouses of active-duty military. He also thanked the Court for the Hays County programs that assist veterans through the Hays County Veterans Services Office.