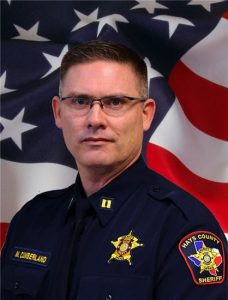 Captain Mark Cumberland became the Captain of the Support Services Bureau in February 2018. He began his career in law enforcement with Hays County as a corrections officer at The Hays County Sheriff’s Office in 1996. Prior to joining the sheriff’s office he served in the United States Marine Corp from 1988 until 1992. During his career with the sheriff’s office he has held the positions of corrections officer, patrol deputy, narcotics detective, patrol sergeant, patrol lieutenant and Captain of both the Law Enforcement and Corrections Bureaus. He also served on the Hays County Special Weapons and Tactics (SWAT) Team as an operator and Commander. Captain Cumberland received an Associate of Arts Degree in Criminal Justice from Blinn College in 1994 then graduated from Sam Houston State University in 1996 with a Bachelor of Science Degree in Criminal Justice.

Additional Training, Awards and Honors Include: