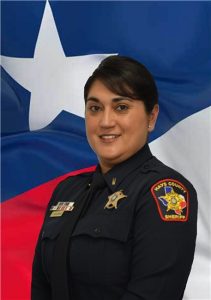 As Captain of the Corrections Bureau she oversees all jail operations and support services including human resources, building maintenance, bonding, classification, transportation, commissary, food service, mail, property and visitation. The Correction Bureau has more than150 employees assigned to these areas with a current inmate population of approximately 600. During her tenure she has established and implemented programs such as the Hays County Bail Bond Board (2000), Victim Information Notification Everyday System (2007), and Field Release Program (2010) and was part of the team that created the Veterans Court (2013).

Additional Training, Awards and Honors include: