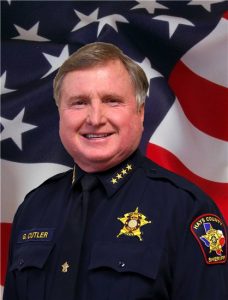 A native Texan, Sheriff Cutler was raised in the small community of Hutchins and graduated in 1973 from Sam Houston State University with a Bachelor’s Degree in Criminal Justice.  He began his career with the Travis County Sheriff’s Office (TCSO) in 1974 rising to the rank of Captain.  At TCSO Cutler served in many different positions including jailer, uniformed patrolman, fugitive warrant/mental health deputy, criminal investigations detective and Captain of Investigation and Process.  As captain he supervised narcotics, evidence, crime scene investigations, special weapons and tactics (SWAT), courthouse security, training academy, victim assistance and the Criminal Investigations Division prior to his retirement in December 2000.  He joined the Williamson County Sheriff’s Office in 2001 in the Major Crimes Division as a sergeant and then promoted to Lieutenant of the division which included, crime scene investigation, evidence and victim assistance.  He moved to the Texas Alcoholic Beverage Commission as an investigator from 2004 until taking office in 2010.

Additional Training, Awards and Honors Include: